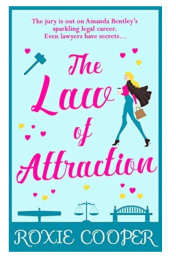 “Well, it’s fair to say your background isn’t conventional in terms of the average barrister…” Dolus points out. “Well that depends on your definition of conventional and who wants to be average anyway?”

She spent her teenage years in the Working Men’s club and hanging out in the park to avoid going home. Fresh out of law school she lands pupillage at a top set of Chambers and is catapulted into a world completely alien to her own, fighting prejudice and snobbery at every turn.

Piling on the pressure, this year it is announced two candidates have been accepted but there’s only one job at the end of it. And her competition? Marty, her smarmy law school nemesis.

Throw into the mix an ill-advised romance with the staggeringly sexy Sid Ryder and Amanda quickly realises winning pupillage isn’t just about how good a lawyer you are.

But even if she does come out on top, all of it could be for nothing if her colleagues ever discover who she really is and one very dark secret.

Amanda takes you on her unconventional journey as she enlists on her pupillage with a point to prove. She is sassy, feisty and doesn’t want to conform, I fell in love with her straight away as she is a girl after my own heart and she isn’t afraid to say what she thinks regardless of whether her actions help achieve her end goal.

I love nothing more than being able to curl up with a book and being compelled to keep turning the pages to find out what happens to the characters that have been bought to life. Roxie Cooper accomplished all of this in her 1st novel, I really enjoyed this book for all of those reasons. It was a lovely refreshing read and I was drawn in and wanted to find out what would be thrown Amanda’s way next and how she would deal with it.